Ten years ago, Jared was an overworked anesthesiologist who lived on fast food and little sleep. After seeing multiple conventional physicians for the acute asthma he’d suffered with for five years, the 32-year-old was desperate for relief. So he visited Thomas Sult, MD, a functional-medicine practitioner in New London, Minn.

As a doctor himself, Jared was inclined to be suspicious of anything that didn’t follow familiar protocols, so this was a reluctant — and last-ditch — effort to get better.

While conventional Western medicine focuses on dealing with the symptoms of illness, functional medicine aims to understand its causes, and it uses that knowledge to treat the roots of chronic disease. (For more on the tenets of functional medicine, go to “Functional Medicine: A Science Whose Time Has Come“.)

Functional medicine operates on the principle that identifying a disease state is not the conclusion of a medical diagnosis; it’s the beginning.

Yet arriving at this deeper understanding takes time, an investment that is central to uncovering and resolving the root causes of chronic illness.

During Jared’s initial consultation with Sult, which lasted more than an hour, Sult asked questions about Jared’s lifelong medical history, as well as his diet, relationships, and emotional state.

He entered this data into two simple documents — a timeline and a matrix — that would help him frame Jared’s illness in an entirely new way.

Here’s a look at how these two key functional-medicine tools are helping many doctors better understand the whole story of their patients’ health.

During his initial visit, Jared answered numerous questions about his health history, while Sult plotted out key events from Jared’s birth to the present day on a timeline. This record would reveal that Jared had taken a series of antibiotic courses as a child and subsequently suffered severe gastrointestinal problems. It also showed that these issues had persisted into adulthood as chronic irritable bowel syndrome (IBS).

Meanwhile, Jared shared with Sult that he had been treated for a parasite a few years earlier, at which time his symptoms for IBS and asthma both cleared up for nearly a year. This might seem like a lucky coincidence, but for Sult the concurrence was critical.

“When we dove into his history and created the timeline, it became obvious that his lungs got bad when his guts were bad,” Sult explains, noting that this connection is not uncommon. “When I laid it out in the timeline, it was like watching dominos fall.”

He suspected that because both IBS and asthma are inflammatory conditions, the root cause of the asthma was the nearly lifelong inflammation in Jared’s gut.

Sult wrote a prescription for an antibiotic to wipe out the parasite he suspected had returned and put Jared on a probiotic supplement and an elimination diet to help his gut lining heal. The new menu eliminated eggs, dairy, gluten, beef, pork, corn, soy, and peanuts.

Despite his skepticism, Jared bought into the plan. When he saw his symptoms laid out on the timeline, he understood how his inflammatory symptoms had developed, as well as how they were connected to one another. This convinced him that healing might be possible if he committed to these changes.

The new diet was especially daunting to Jared, who ate mostly fast food, largely because he didn’t have time to cook. A lifestyle counselor at Sult’s clinic coached Jared in preparing enough vegetables, fruit, fish, and chicken to get him through the week.

Jared saw a marked improvement in his asthma within three months. He continued with the anti-inflammatory diet and nutritional supplements — though he fell off the wagon a few times — and within two years had fully recovered. From asthma and IBS.

“The whole purpose of the timeline is to uncover those temporal relationships that aren’t always obvious until you put them on paper,” Sult explains.

It wasn’t solely the timeline that enabled Jared and Sult to come up with a better theory about his symptoms. It was seeing the connections between them — a process supported by the second essential tool used by functional-medicine physicians: the matrix (below).

Drawing from an extensive interview with Jared, this is the simplified narrative of Jared’s medical history that Sult created, starting from preconception (some health conditions have their roots in prebirth factors). The timeline helped uncover the triggers of Jared’s complaints: His asthma, IBS, and depression could all be linked to gut dysbiosis, which developed in childhood and was likely exacerbated by adult parasitic infections, and dietary and lifestyle factors. 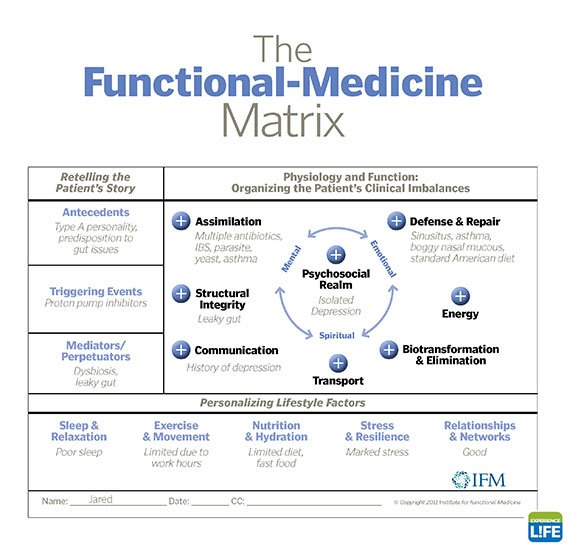 One of the key principles of functional medicine is that no illness happens in isolation. The matrix offers a vivid visual illustration of this.

“The matrix is a new lens to look at all your body’s systems, symptoms, and risk factors and see the story they tell about why you got sick and how to get better. It connects the dots between all your symptoms,” says Mark Hyman, MD, director of the Cleveland Clinic Center for Functional Medicine.

The matrix helps providers organize patient information and guides them in where to begin treatment, mainly by pointing toward underlying issues with overall bodily function. The matrix shows how diverse symptoms might be linked, as well as which systems — not just which organs — need the most support first.

The seven fundamental biological systems that comprise the matrix are called nodes, and each node represents a different set of biological functions, such as communication between cells, or the absorption of vital substances like nutrients and oxygen.

After conducting the initial interview and a physical exam, and filling out the timeline, the practitioner plots a patient’s symptoms with his or her corresponding nodes on the matrix.

Symptoms typically cluster in some nodes more than others, signaling to the provider where to initially focus treatment.

Meanwhile, the nodes are framed by the larger context of the patient’s life. The left and lower edges of the matrix (see Jared’s example at right) are for historical and lifestyle factors that might signal a predisposition or vulnerability to particular health struggles.

At the center of the matrix is a circle, around which all the nodes revolve. This piece of the map represents the patient’s overall sense of well-being.

If a patient is suffering depression, for example, it may be a result of a hormonal, biochemical, or toxic imbalance. It may also indicate that coaching and emotional support are necessary to help the patient follow through on lifestyle changes.

“Our thoughts, beliefs, and attitudes are not abstract. They have a powerful impact on our biology,” says Hyman. “Our immune system and gut flora effectively eavesdrop on our thoughts. Our brain size can grow or shrink depending on our response to stressful events.”

Addressing the root causes of urgent conditions often solves many problems at once. This is exactly what happened with Jared. Though he went in to be treated for asthma, he got two for one: The asthma cleared up once his GI tract was healed and his inflammation subsided. No more asthma, no more IBS.

“Everything in the body is connected like a web,” explains Hyman. “Address the root of the problem — gut issues that drive inflammation throughout the body — and all sorts of other locations get better, including the lungs, joints, skin, brain, and more.”

For Sult, the value of the timeline and the matrix lies in how they help tell a different story about an illness.

“People create a mythology about why they’re sick because they have to understand it, and if their myth is ‘I deserve this,’ then it’s going to be harder to get well,” says Sult.

“But the story can be converted to ‘You got this weird bug when you were traveling and it seemed trivial, but it led to leaky gut and an inflammatory immune response, and that is causing your illness.’”

Putting illness in these broader contexts also empowers the patient to play a bigger role in his or her own healing. It was ultimately the changes Jared made for himself — in his diet and elsewhere — that healed him. Sult just pointed him in the right direction.

“The timeline and matrix tell a story,” says Hyman. “They inform a path forward to address the root of suffering and pain and provide hope and clarity where there often was none.”

Kristi Hughes, ND, director of medical education at the Institute for Functional Medicine, runs a clinic in Alexandria, Minn. In the cases below, the matrix helped her diagnose two patients experiencing unique health issues with type 2 diabetes — and enabled her to come up with two different and individualized treatments.

Hughes’s first patient was an electrician with a great love for fishing. During their interview, she inquired if he had been exposed to toxic materials on the job. He said he frequently worked with lead pipes, so she asked whether he was exposed to lead in other situations. It turned out he had a habit of holding lead sinkers in his mouth as he tied them to his fishing line.

Hughes knows that high levels of lead can affect metabolic function, blood-sugar levels, and blood pressure, so she wasn’t surprised when she worked through his matrix and saw that some of his key symptoms clustered under the biotransformation node, which involves detoxification.

His body’s natural ability to remove toxins was altered by the environmental exposures to lead, and the type 2 diabetes was just one outcome. Hughes adjusted his therapeutic intervention to include supervised oral chelation therapy, which led to marked improvements in blood sugar and blood pressure.

Hughes’s second diabetic patient, a woman in her 40s, revealed during their interview that her diet was composed largely of simple carbs and sugar. She turned to comfort foods to deal with a stressful job and family situation, and it had turned into a destructive addiction. “It was very lifestyle driven,” Hughes says.

In laying out the woman’s story on the matrix, Hughes found the bulk of her symptoms showed up in the center, the area used to indicate the patient’s mental-emotional-spiritual state.

“Her draw toward unhealthy food choices was based on the hit she would get — the endorphin rush, the sugar rush,” Hughes says.

“A big part of her treatment was psychological therapy — she needed to be aware of the cravings and dig into ‘Why do I feel like I need sugar right now?’” This new mindfulness led to her diet and lifestyle transformation.

If Hughes had applied her Patient 2 approach to Patient 1 (whose type 2 diabetes was rooted in an altered metabolic function influenced by lead exposure), Patient 1 would have likely continued to struggle without much improvement.

Similarly, if Hughes had started a detox regimen with Patient 2, it would not have helped the woman overcome her emotional sugar addiction.

While both patients revised their diets and started exercising more, the departure points for their treatments were radically different. They both successfully controlled their type 2 diabetes without resorting to prescription medication, while the clarification provided by the timeline and matrix played a key role in getting them the unique support they required for healing.

Read The Disease Delusion by Jeffrey Bland, MD, or Just Be Well by Thomas Sult, MD — both books explain the functional-medicine matrix nodes in more detail. Or visit www.functionalmedicine.org to locate and research functionally trained medical practitioners near you. For more in-depth functional-medicine coverage, see ELmag.com/fmcoverage.

4 comments on “The Functional-Medicine Matrix”

Get a free download of The Institute for Functional Medicine’s Elimination Diet Comprehensive Guide!

Functional Medicine: A Science Whose Time Has Come

Many people are finding better health solutions with functional medicine, a new model for how to practice medicine and treat chronic disease.