Many of us dutifully eat our veggies, yet few of us fully understand why they’re so good for us. A lot of it comes down to phytonutrients, the powerful, plant-based chemicals found in veggies as well as fruits, legumes, whole grains, nuts, herbs, and spices.

Unlike macronutrients (such as proteins, carbohydrates, and fats) and micronutrients (vitamins and minerals), phytonutrients are not considered critical to our short-term survival. But, experts say, they are absolutely essential to warding off chronic diseases, including cancer, type 2 diabetes, and brain disorders.

Most of us are familiar with the beta-carotene found in carrots or the rich stores of lycopene in tomatoes. We may even use resveratrol as an excuse to pour ourselves a glass of red wine. But what about the other 25,000 phytonutrients? Yes, there are that many.

The good news is, you don’t need to take a zillion supplements to get them all. Since many phytonutrients are responsible for the hues of the plants they’re found in, simply eating a wide spectrum of colorful, plant-based foods will ensure that you’re getting the diversity you need.

Epidemiological studies have shown strong links between plant-based diets and health, but researchers are still trying to discern exactly how phytonutrients are involved. Because dozens of families of phytonutrients (including polyphenols, carotenoids, and saponoids) work in concert at both the cellular and genetic level, their biochemical functions can’t be easily teased out. (For a list of the major phytonutrients and their vital powers, see “Phyto Power“.)

What is known, according to nutritionist Deanna Minich, PhD, FACN, CNS, founder of the Food & Spirit nutrition program and a faculty member of the Institute for Functional Medicine (IFM), is that phytonutrients play three key roles:

Overall, phytonutrients appear to have a protective, immune-supporting and anti-inflammatory effect throughout the body.

Recent studies show that people who developed stomach, lung, breast, and uterine cancer had lower phytosterol levels than those without cancer. (Phytosterols are a type of phytonutrient common in foods such as flaxseeds, almonds, pistachios, and broccoli.) Other research shows that high ingestion of phytosterols appears to reduce the growth of breast and prostate cancer in animals.

David E. Williams, PhD, environmental and molecular toxicology professor at the Linus Pauling Institute, studies the effects of phytonutrients in utero. He believes exposure to phytonutrients, starting even before birth, decreases our susceptibility to many chronic diseases, including cancer. 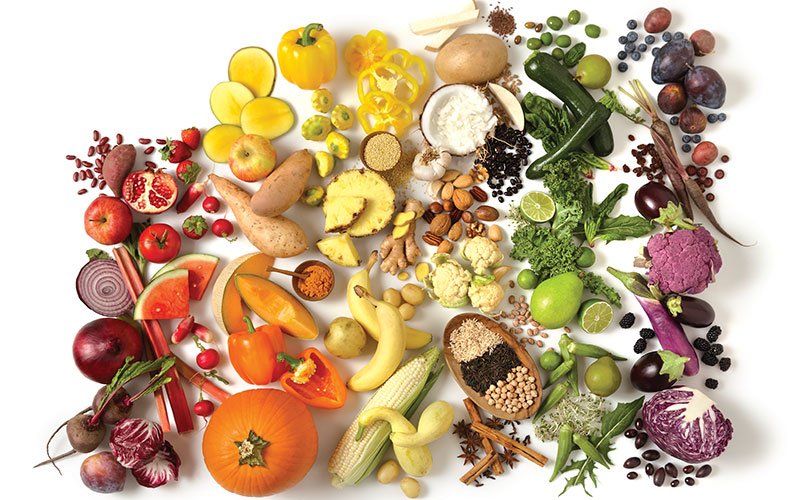 “You can’t just take one nutrient for one effect,” Minich says. “It’s best to focus on smaller amounts of many phytonutrients.”

As Kristi Hughes, ND, a Minnesota-based functional-medicine naturopathic physician and the IFM’s associate director of medical education, explains it, different ailments might call for different combinations of phytonutrients. For example, Hughes says she may combine curcumin with other phytonutrients to fight inflammation in a patient’s gastrointestinal tract.

For a person simply looking to enhance overall health, the best bet when it comes to phytonutrients, says Hughes, is to remember the two Ds — density and diversity.

To make sure you are getting a diversity of phytonutrients, focus on the rainbow. Start with a simple plate of raw veggies: red pepper, green peapods, yellow cherry tomatoes, orange carrots, and purple cauliflower.

Then, the next time you shop, go for even more diversity within one of the color groups, suggests Minich. Different foods within the same color family offer different phytonutrient benefits, so instead of blueberries, pick up marionberries, and instead of watermelon, buy tomatoes.

Start swapping out starchy white staples for more vibrant ones: Make purple mashed potatoes or cook up a pot of black and red rice. And, remember, healthy foods that are white, tan, and brown are included in the rainbow, too, such as cauliflower, fennel, garlic, ginger, tahini, unsweetened cocoa, and lentils.

For the most part, vegetables have a greater healthy impact than fruits, says Williams. The crucifer family — broccoli, Brussels sprouts, kale, and others — is especially phyto-rich. While all the colors count, he says, you get the biggest bang for your nutritional buck by emphasizing green.

There’s no single best way to prepare foods to reap their phytonutrients. Some are better for you raw (such as many fruits) and some are more nutritious when cooked (such as carrots, spinach, and mushrooms).

“For example, when cooking strawberries, some of the bioactive compounds may get destroyed, so it’s better to consume these raw and chew well. But it is difficult for your body to fully extract and absorb the beta-carotene and other compounds in raw carrots. And cooking them with oil improves absorption.”

A general rule of thumb, says Minich, is to apply the rainbow rule to food preparation: Cook food until it’s at its brightest. “When broccoli turns that brilliant jewel tone of green during sautéing, that’s the time to eat it,” she says.

Some research has shown that organic produce tends to be richer in phytonutrients — perhaps because plants develop their bioactive compounds to defend themselves against pests and other stressors. Overly protected, pesticide-laden conventional produce may not be called upon to develop its full phytonutrient potential.

For example, Mertens-Talcott explains, “Resveratrol is only created if a plant is stressed by heat or pathogens, so grapes from a shade- or herbicide-protected vineyard may have less resveratrol.”

If you are not able to reliably eat a diet rich in plants, Minich says you may be able to resort to supplements for some of what you’re missing. Pills will never provide everything in a whole food, she notes, but they can play a supportive role.

“When I’m undergoing more stress, or when I’m traveling and I know I’m not going to have access to good food, that’s when I’ll bring my bag of supplements,” she says.

If you do opt for phyto-supplements, she suggests, aim to follow nature’s example: “You don’t want a high amount of a single agent, but, rather, small amounts of many.”

Just remember, Minich advises, no capsule can do for you what real produce will: “A whole food carries much more complexity than the limited constituents of a pill.”

5 Steps to Getting More Phytonutrients

Consider these tips from the Institute for Functional Medicine:

1. Load Up On Produce

Aim for nine to 13 servings of vegetables and fruits daily. One serving equals a half-cup of cooked veggies, 1 cup of raw leafy veggies, or a medium-size piece of fruit. Think of it as three to four servings per meal. In addition to veggies and fruits, phytonutrients abound in whole grains, legumes, nuts, seeds, and even herbs and spices.

Unless they have added colors, most processed foods come in tan, yellow, and white. Make it your goal to get the full spectrum — red, yellow, orange, green, blue/purple, white/tan — every day with a variety of  naturally colorful foods. (Sorry, Froot Loops and M&Ms don’t count.)

Try a new food every week, and you’ll get the colors of the rainbow from new and different sources.

Try eating plant foods in combination for an enhanced benefit. For example, pairing turmeric with black pepper and olive oil (on cauliflower, for example) has a synergistic health effect.

Ramp up your old standbys with more phytonutrient-dense versions. Make orange or purple cauliflower instead of white cauliflower. Try purple mashed potatoes — or even sweet potatoes — instead of the traditional white spuds. And swap out white rice for purple, black, or brown.

Sheila Mulrooney Eldred is a writer based in Minneapolis.

The Secret Lives of Fruits and Veggies

Do you think of apples, peaches, cucumbers and red peppers as inert, lifeless objects? ﻿Take a closer look at the magical inner workings of fruits and vegetables, ﻿and you’ll never see them quite the same way again.

Phytochemicals — plant-based micronutrients that contain protective, disease-preventing compounds — might just be the best-kept secret in nutrition.

These phytonutrient-packed wonders are fabulous for your heart, skin and bones.

This superstar vegetable helps fight cancer, reduces the risk of heart disease and osteoporosis, and even helps prevent birth defects.