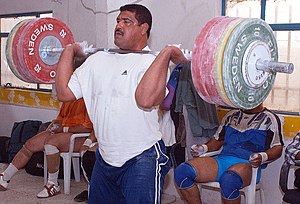 For a brief period in my teen years, I had a friend who owned a set of barbells. It must have been a Christmas present, because I don’t recall him ever being interested in lifting weights prior to that time. He was more of a free spirit; and, now that I think about it, the barbells may have been an attempt by his father (who had issues of his own) to “weigh” him down in some metaphoric way. It had little effect on his waywardness, but it did offer me my first opportunity to practice the clean and jerk — which we did late one night in his basement.

Teenagers are particularly prone to peer pressure, and I was no more immune than most. So, when my pal hoisted 100 pounds up and over his head, I felt compelled to do the same. I think at the time I may have weighed 100 pounds (the wrestling coach at my high school was rumored to be after me to grapple in the 98-pound weight class, though he never approached me personally, which was a good thing, given that I hated wrestling and was never very good at saying no), so the notion of hoisting something that weighed at least as much as I did above my head was not something that appeared to be in the realm of possibility. But, when you’re 16 years old, most things seem perfectly reasonable, so I grabbed the bar and not without some difficulty managed to muscle it up to my shoulders and shakily get it over my head and back down to the floor without injuring anyone.

I was able to avoid any more lifting that evening and for the next 39 years. It’s nice to know that, if you ever really needed to, you could pick up a hundred pounds and push it over your head. Might come in handy during some natural disaster. But, as with other difficult things, when I’ve proven I can do something once (write a book, publish a newspaper, clean-and-jerk my weight), I don’t feel an urgent need to do it again.

That’s not to say I’ve given up on weightlifting. I actually really enjoy lifting. It’s a great way to get cardio and strength training in one compact workout. I never leave the gym without spending 20 to 30 minutes hoisting iron — dumbbell lunges, goblet squats, curls, shoulder presses and the rest. But I don’t need to do the clean-and-jerk with a weight approximating my own, you see, because I’ve done that.

It may appear to the casual observer that I’m just avoiding a good challenge, but actually there is hard science backing up this behavior. Studies at the University of Tsukuba in Japan and at the University of British Columbia found weightlifting sparked more neurogenesis (or brain cell growth) than endurance training, according to a recent article in The New York Times. This means that weightlifters might actually be building better brains than marathon runners.

Resistance training, according to Teresa Liu-Ambrose at the Brain Research Center at the University of British Columbia, improves blood flow to the brain by strengthening the heart. And, while endurance training also boosts cardiovascular performance, weightlifting requires more brainpower, because, as Liu-Ambrose puts it, pumping iron requires more thinking about “proper form and learning the technique.”

All this research rings true in my particular experience. By lifting weights regularly, I’ve become smart enough to never again attempt to clean and jerk my body weight.

My friend, by the way, soon lost interest in his barbells, as I recall, and moved on to more dangerous pursuits, the results of which sent him to an early grave. There’s no guarantees, of course, but now I wonder whether he would’ve made smarter choices if he’d lifted more.